This article appeared on Smithsonianmag.com Nov. 18, 2015:

Standing on the blustery beach, Bruce Mate wears a camo slicker, green bibs, a tidy white beard and a somber expression. While Mate’s getup suggests a typical day in the field for a marine mammalogist, the box of latex gloves and bottle of chainsaw lubricating oil under his arm hint at this morning’s unusual task.

Behind Mate and a dozen students from Oregon State and Humboldt State universities, a dead blue whale stretches across southwestern Oregon’s Ophir Beach. The tide is still high on this bright November Saturday, and huge waves break against the cetacean’s sagging frame, sending up sprays of saltwater and scattering scavenging gulls into the air. 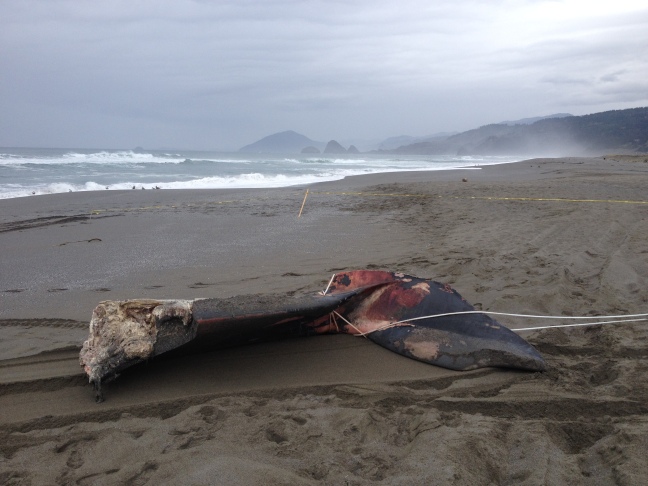 The behemoth corpse stranded here the previous Monday, November 2. As far as Mate knows, it’s the first recorded case of a blue whale washing up on the Oregon coast. The creatures are rare; perhaps 2,500 ply the eastern north Pacific, making up between 10 and 25 percent of the global population.

Because blue whales range over vast distances, they tend to sink far from shore when they die, seeding and sustaining a diverse ecosystem of creatures on the seafloor. For a carcass to drift within reach of human experts is the scientific equivalent of that bonanza, known as whale fall. A day after the stranding, Mate, who directs OSU’s Marine Mammal Institute in Newport, and OSU stranding coordinator Jim Rice were on scene with a mission: Extract the giant skeleton for public display. More…