This post appeared at The Last Word on Nothing on April 8, 2016 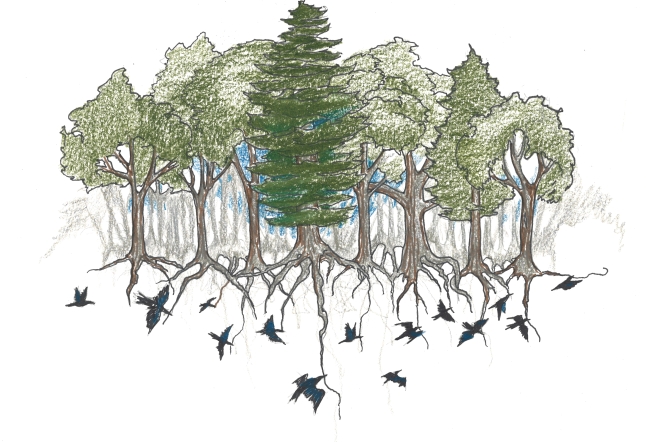 Corvids are a wonderful genre of beast.

I was reminded of this fact not long ago when, biking back home across southeast Portland from the waterfront, a veritable river of crows began streaming overhead. Thousands of them blurred and bobbed and circled each other in a stuttering current from east to west. This current eddied over warehouses. Spilled over parking lots. Formed a recirculation hole over the freeway, then fanned into a delta and out of sight beyond the skyscrapers of downtown. Corvid biologist John Marzluff later told me that the crows were likely heading for a communal roost to settle for the night. There’s one in his home city of Seattle that’s 15,000 strong.

Besides coalescing into this sort of breathtaking “murdermuration,” as I’ve decided to call it, crows recognize their dead, understand analogies, and one species, the New Caledonian crow, even makes its own tools.

Yet while crows and ravens get most of the attention, smaller members of the corvid family like jays and nutcrackers are out in the world busily building and rebuilding forests. Not on purpose, of course, but through a behavior charmingly called “scatter hoarding,” which basically involves stashing seeds around in various places for later devourment. (The same phrase could easily describe the way I distribute books throughout my house.) More…